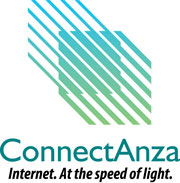 Anza Electric is a small member-owned utility that serves approximately 4,000 homes over 700 sq miles of rural high California desert. It decided to start offering FTTH Internet service in 2015. Since it owned its own network of power utility poles, it was a relatively easy decision to create an aerial GPON network.

By the end of 2016, Connect Anza served 300 customers in a traditional 32 fanout GPON network. They had laid approximately 200 miles of backbone cable and were still building out the network to encompass about 4,000 homes passed.

Initially they only offered 50 Mbps service since their ISP uplink was expensive (they are geographically isolated). Their single upstream ISP is Level 3 Communications and they initially contracted a 200 Mbps connection bursting to 300 Mbps, but with 300 customers, they would max out during peak times. In 2017, they increased uplink capacity and also increased subscriber link speeds to 100 Mbps.

Anza is very rural with typical lots 2-5 acres in size (some much bigger), but additionally spread over a very wide region. They almost exclusively use their existing aerial poles for their backbone, while almost always trenching the drops to the houses. They typically use a vibrating plow to do their trench drops to put in small conduit ducts 18" below grade, and then pull a two fiber drop cable to each house.

The design of the network was done by Jeff Willis, an independent contractor. Jeff wrote the preliminary feasibility study that enabled Anza to get a rural telecom grant to fund about half of their network costs. He also did the preliminary and on-going cost analysis, as well as the VERY detailed network design.

Anza charges $50/month for their now 100 Mbps connection, and requires a $100 equipment deposit. They expect to be positive cash flow in year 4 of the network, and to be returning $1.5M back to the customers (they are a co-op) in year 5, and are currently on track to do that.

They estimate that each connected customer costs them $1,700 in total expenses (house drop, house equipment, share of backbone, and share of head end equipment).

You can read more about this network here, just scroll down about halfway down the page.