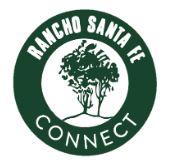 Rancho Santa Fe is an HOA in San Diego county (California) with about 2,000 homesites. It was formed in 1928, and as such it is not your typical HOA. The only universal utilities are power, water, and copper telephone lines. The roads are owned by the county and are built to weak specifications (for instance, no curbs). The HOA is large enough that it has full time paid staff and operates like a small municipal government with revenue, parks and rec, and planning departments.

In 2011, the HOA formed a committee of residents to determine how Internet access could be improved from the typical 2 Mbps to 6 Mbps speeds available. After many months of meetings with the incumbant teleco and various cable TV operators, it became apparent that no one wanted to upgrade their network for the rather spread out semi-rural community.

A few years went by and a second committee was formed to build a full FTTH network. Magellan Advisors was hired to acquire and sift through about nine proposals from outsourcing firms. In 2015, the committee chose Hotwire Communications to build and operate a FTTH network including a full cable TV headend.

RSF had not yet done their full financial due dilligence on the project, however, so they put together a Letter of Intent with Hotwire and paid them a design fee to do a fiber design. By mid 2016, RSF realized that the financial structure (with RSF owning cable TV headend equipment) was going to be burdensome. At the same time, a new HOA Board had been elected and they decided to cancel the Hotwire deal. So, they formed a third committee and started the process all over again from scratch.

Once the ISP was selected, and monthly Internet fees were determined, the RSF board put the construction costs to a community vote. Using the design firm's estimate, they asked the community to spend $14M to build the network. They recevied an 85% YES vote, a truly unprecendented positive vote. Once the construction bids were in, however, estimated costs had risen to $19M, or approximately $10,000 total per household. In the end, the network cost $16.4M.

While the community has an extensive off road network of equestrian horse trails, RSF decided they would rather build the network almost entirely in the public roadways. They decided that gaining access to the privately owned land that the horse trails ran on was too problematic. Ironically, deep into design, RSF realized that they needed to gain access to a large number of private roadways to build the network. It turned out that about 15% of residents live on a private road. In addition, since the remaining 85% of the roads are owned by the county, the county imposed fairly strict rules for digging in their roads, requiring the conduits to be buried with 2' of cover.

RSF built the backbone network and central office, while pushing the burden of trenching and installing a conduit from the house to the roadway onto residents. The ISP worked with residents to build these house drops.

The overall network is a homerun, single fiber to each house design. The ISP will use telephony grade Calix network equipment with predominantly GPON cards, meaning that the central office will house optical splitters.

RSF had accumulated $8M into a community enhancement fund over several years through extra HOA assessments they had been charging. The network construction will be funded by using this fund as well as continuing to collect this assessment for ten more years, as well as charging a surcharge on top of the ISP monthly fee for those that sign up to use the network. The ISP will charge $70/month for gigabit Internet, and RSF will impose a $65 surcharge to help pay for network construction until the network is paid for (a bank loan will cover the costs in the interim).

Probably due to the extended time it took to construct the network, other communication companies have been slowly and piecemeal extending their networks into RSF. However, none of them are pure fiber and none will be able to offer gigabit speeds and reliability that this network offers. The construction money is seen as well spent if for no other reason than to enhance property values. Being able to boast an all fiber gigabit Internet network is a big selling point when a house is put on the market.

Update: July 15. 2019, the first house was lit, approximately 10 months after HP Communications started construction. You can read press articles about this network here.

Update: July 1, 2020, 646 customers have been connected, with a continued pipeline of orders. About 90 customers per month are being added.